I introduced my son to solids the only way I thought possible—the traditional “puree, spoon-fed” way. But, turns out, it’s not the only way. 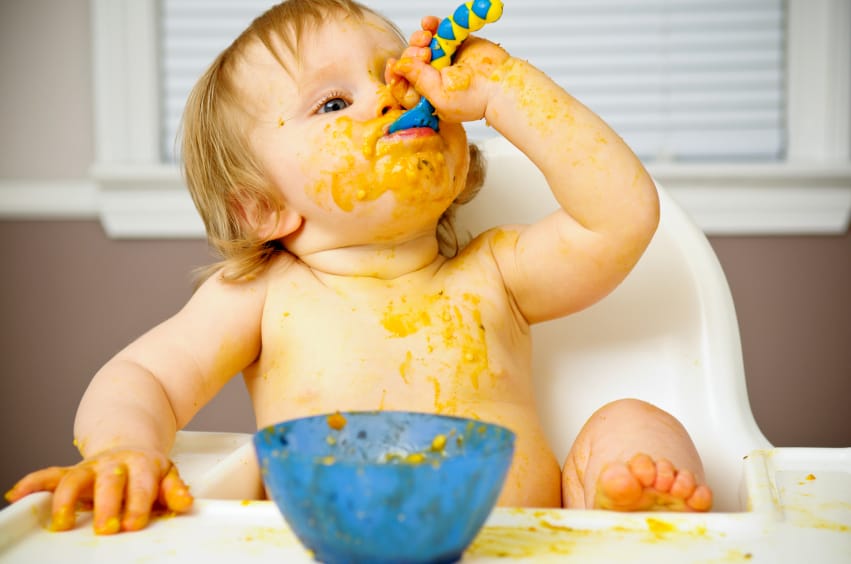 I introduced my son to solids the ONLY way I thought possible- the traditional “puree, spoon-fed” way. But is that the only way?

I had never heard of this before and didn’t know what to think when my friend was describing it. A part of me wanted to put on my ‘Dietitian hat’ and say “but what about the importance of iron-rich foods when first starting solids?” and “what about choking?!” and “are you crazy??!!” (I wouldn’t have actually said that;), and part of me was SO curious and wanted to know more (in a good way).

I sort of forgot about it for a while, but have heard more and more about it since. And now I’m intrigued BIG time! Parents who introduce their baby to solids this way SWEAR by it!  I’ve decided to do some research to learn more about it.

Hey, I may even try it next time around! Who knows?

What is Baby-Led Weaning?

Baby-led weaning (BLW) is method of introducing your baby to solid foods at 6 months of age when they are able to sit up straight and grasp food themselves, where there are no purees and there is no spoon feeding. Babies go straight to finger foods and feed themselves until they are old enough to use utensils! Ok, I know some of you are saying “what the…?!” but just stay with me…

BLW has grown in popularity ever since the recommended age to introduce solids has changed from 4 months to 6 months. When parents introduced their babies to solids at 3 or 4 months, they did so by first feeding pureed foods with a spoon (which most of us still do now when are babies are 6 months). Those who follow a BLW, for the most part, believe that purees and spoon feeding are not necessary at 6 months of age- babies at this stage are fully capable of feeding themselves and are able to eat most foods that the rest of the family eats. It’s recommended that you start with foods that are big enough  for baby to grasp. Cooked broccoli spears are a popular one because of this. Babies don’t have the “pincer grip” at 6 months, so aren’t able to start with smaller sized pieces of food.

What are the benefits?

There isn’t much scientific evidence to show benefits or drawbacks to BLW, but anecdotal evidence shows and certain experts believe that babies who are introduced to solids this way are better at self-regulating their food intake (honouring their natural hunger and satiety cues) and are less likely to be picky eaters. This is why I’m most intrigued in BLW. It is also said that it is easier for babies to join-in on family dinners this way and is much less work for parents (no pureeing!).

What are the drawbacks?

BLW is said to be a bit messier than the traditional spoon-fed approach. Also, not all foods are shaped in a way that a baby can easily grasp. Foods that come to mind are infant cereals, berries, peas etc. Because of this, a baby’s diet may be limited at first. Also, babies who are at a high risk (family history) of food allergies or intolerances may be at increased risk if introduced to certain foods too early. Another drawback may be the weird looks and unsolicited advice from people who you know and don’t know who think you’re crazy. Gosh, was that me?! I hope not! I did hold back the best I could;)

In some ways, it sounds fantastic!  I can see how it would allow a baby to self-regulate his or her food intake better than the spoon-fed approach and perhaps encourage them to be a more intuitive eater from day one (which I LOVE). I also really like the idea of not having to make purees and that my baby would be able to eat what the rest of the family is eating!

Here are my concerns…

CHOKING! I know that my baby was gagging on runny rice cereal at the start, so I can’t imagine that he would be able to handle a chunk of broccoli! Those who do use the BLW method say that their babies do not choke and that their gag reflex is mature enough to be able to prevent choking. I’m skeptical!

Nutrients of concern: Babies ages 6-36 months are at an increased risk of developing iron-deficiency anemia. If a baby is not being fed iron-fortified infant cereals and is not yet able to chew meats and poultry (I’m just guessing here…), how would they possibly take in enough iron? I suppose there are other sources of iron such as egg yolks and fish, but I’m skeptical that a baby would meet his or her iron needs in those first few months, especially if he or she is breastfed as well…

What are your thoughts? I’d love to hear!

Without even knowing it, the most well-intentioned

Divorce 💔 As someone who has been through it,

It hasn’t been until recently that I’ve reflec

I’m asked about protein for kids A LOT. And for

2 shares
Ready to end mealtime battles and raise healthy, intuitive eaters? The Mealtimes Solved on-demand program is for you!
Join the program now!
This is default text for notification bar
Learn more