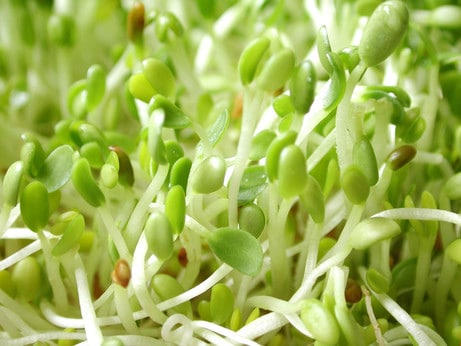 You may know that you shouldn’t eat sprouts while you’re pregnant because of the risk of food poisoning, but what about people who aren’t pregnant? Health Canada recently released a statement reminding Canadians to be cautious when eating sprouts such as bean sprouts, alfalfa sprouts, broccoli sprouts etc. especially if they are pregnant, under the age of five, older adults or immunocompromised in any way. Unless sprouts are cooked thoroughly (and I wouldn’t even trust those), they should be avoided by all at-risk populations.

Sprouts often appear in Asian cuisine, on salads, or as a topping for burgers or sandwiches. They are low in calories and add a seemingly healthy boost to many dishes.

Except when they are contaminated.

Sprouts often carry harmful bacteria such as E.Coli and Salmonella which can cause serious food-borne illness. Those who have a weakened immune system are the most at risk, however anyone who eats sprouts, healthy or not, is susceptible. In fact, between 1995 and 2011, there were approximately 1000 cases of food poisoning reported in Canada alone that were caused by sprouts. No doubt there were many more cases that just weren’t reported. Scary stuff. Symptoms of Salmonella poisoning usually occur within 72 hours of exposure, whereas the symptoms of E.Coli may not surface for up to 10 days after exposure.

Symptoms include nausea, vomitting, diarrhea, fever and cramps. Health Canada suggests to see your Doctor if these symptoms arise. In extreme cases, E.Coli poisoning can lead to kidney failure and death!!

If you’re going to be brave and eat sprouts, make sure that you purchase fresh, crisp sprouts that have been refrigerated properly. Don’t purchase sprouts that are dark or dull in colour or have a musty smell. Wash thoroughly at home prior to consuming and be extra cautious when at a restaurant (or request no sprouts).

ps. I’ve been blogging like a mad-woman over at The Yummy Mummy Club. Check out my latest posts here: The Non-diet Dietitian

« Breaking-the-Fast: Why Breakfast is Something You Don’t Want to Miss
Why We Shouldn’t Label Foods As “Good” or “Bad” »

What we say to our kids really does matter to thei

The next time you feel guilty about sending the od

We remember today (and always) the brave and coura